To get to Lisson Gallery, I jog along the green corridor of St Jame’s Park, Green Park and Hyde Park before cutting through the Paddington Basin and finally taking the underpass under the busy A40 and Edgeware Road. Lisson Gallery is hosting a group show themed around Chardin and in true Lisson spirit, the artworks are decidedly minimal as though the artists know there is nothing to be gained in trying to outdo the old master’s realistic rendering of light. The artworks are good though and include a great piece by Audrey Barker that looks like the palette of colours in an oversized make-up box. In the gallery’s other building, the central room has been filled with razor wire. Santiago Sierra creates spaces that are reminiscent of borders and boundaries to try to make us reflect on the effect of separation and the extreme measures sometimes used to enforce it. The grid pattern of the razor wire is actually remarkable on account of its regularity, allowing distinct shapes and patterns to be picked out from different viewpoints.

The next destination is Camden Arts Centre on the outskirts of Hampstead. Daniel Richter is showing a retrospective of his painting that includes figurative and abstract works. One of the latter works stands out as stunning having an enormous quantity of elements and layers to it. Meanwhile in an adjacent room a second artist, Jennifer Tee has made juxtapositions of woven fabrics and plastic objects that seem to be colour-matched and produce a strong overall effect of unity.

Jogging up to Highgate, a number of shrines come into view occupying a small section of tree-lined grassland cordoned off from the main village green. There are candles, flags and photographs and it quickly becomes clear that these are dedicated to George Michael. But there is also an intensity to the tributes suggesting that he really did die before his time.

After several more miles of green space, albeit with a dusty stretch through Angel, Wharf road plays host to the next gallery, Parasol Space. Vibrant work by Monique Frydman is on show. Close by, Stuart Shave Modern Art is showing the work of gallery artist Katy Moran. She has incorporated great brushstrokes into her paintings that seem to be made up of different colours, as though she loaded up the width of her brush with a selection of different colours. Then having been passed across the surface, the resulting strokes have brought these colours to life as coloured streaks which remain differentiated from their neighbours.

Finally Carl Freedman gallery is showing Nel Aerts. She has produced sublime cartoon-like paintings which portray the artist herself experiencing a period of slight isolation during a residency she was doing at one of Van Goch’s former dwellings. The gallery manager sneezes at the front desk which is out of sight and in that split second when I’m wondering whether to acknowledge it, he suddenly remembers that the gallery lights have been switched off and kindly rushes to put them on. The colourful paintings acquire an even greater intensity and new details appear.

Audrey Barker at Lisson Gallery with a fab palette of colours in an exhibition celebrating Chardin.

Santiago Sierra of Lisson Gallery with a no-go space full of razor wire. 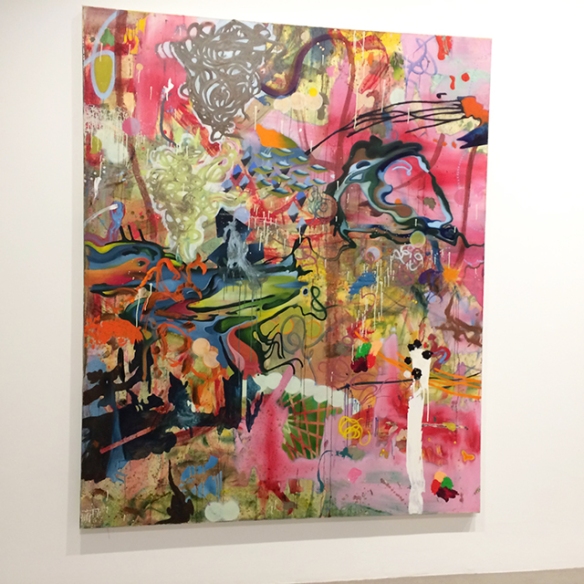 Daniel Richter at Camden Arts Centre, with a retrospective of his paintings including this great abstract piece. 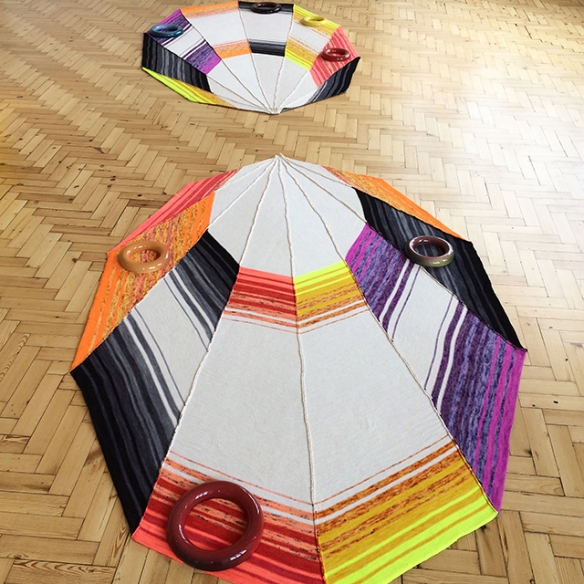 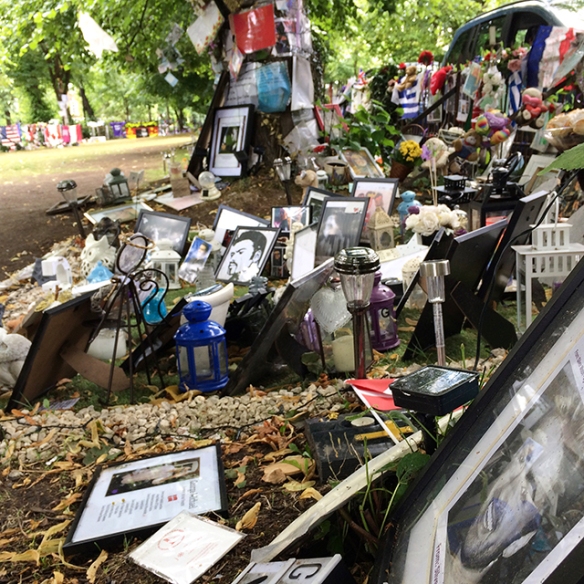 George Michael shrines around trees on the way up to Highgate village from Hampstead.

Monique Frydman at Parasol Unit with great abstract pastels built up from rubbings and a vocabulary of repeated marks.

Nel Aerts of Carl Freedman with paintings and fabric cartoon-like figures, mainly the artist herself, inspired by a residency in a former home to Van Gogh.