The Saatchi Gallery has been closed for the last two weeks and today’s run offers an eagerly awaited opportunity to check out the group show there. Makiko Kudo, who was previously on the books of Wilkinson Gallery before its recent closure, is showing paintings in one of the rooms. Her subject matter includes figures and trees and a multitude of interactions between them. The figures actually appear to have been gathered up by the arboreal companions and then raised to a viewpoint where they can look down upon the world as though from a lookout post or treehouse replete with those memories of childhood. Also of note in the group show is Dale Lewis. His paintings of street kids and workmen in visibility tops are striking. The figures are all engaged in energetic mannerisms around tables or standing in groups and their movement is conveyed effortlessly, with the figures’ flailing limbs sometimes occupying several positions at once.

Meanwhile, though not quite literally, my own flailing limbs have taken me to South Audley Street where Massimo De Carlo gallery is showing Yan Pei Ming. This artist has depicted the famous scene first rendered by the painter David, in which Napoleon has taken his crown from the then Pope and is lowering it onto his head, his first act as emperor. For an event of such historical importance the painting has to be good and the artist doesn’t disappoint. He has rendered the image not just once, but five times over in a series of tinted, coloured monochrome paintings. Two of these striking images are actually placed beneath the gallery’s own elegant chandelier, and whether by accident or design, the painted crowns seem to sparkle and refract in a way that is prompted by the illuminated glass immediately above them.

At Southard Reid, the gallery assistant is on the phone. But she helpfully gestures to the press releases presented in a neat pile at the foot of a small staircase. The artist R M Fischer is from New York and undergoing something of a renaissance, we are told. He has made a particularly impressive work using plumbing fixtures, such as taps and pipes, to create a sort of bas relief against a background that is itself reminiscent of a section of bathroom wall. On this surface, almost like a graffiti artist, he has rendered fat lines with marker pens and possibly oil sticks, to create the rough forms of cartoon faces. These in turn have commandeered an occasional washer or random mark to act as make-shift eye or expressive feature.

From here it is eastwards. Having slightly overdone the Thames and Regent’s Canal routes in the past, today will use the busy streets, populated by cars and people, to play host to the remainder of the run. Hollybush Gardens is accessed by a staircase that connects the main road to a small network of streets below and it is in this hidden enclave that Claudette Johnson is on display. She has made beautifully economic paintings of figures that dominate the space in which they are portrayed and her sitters, who are all from ethnic backgrounds, appear empowered to leave the confines of the picture plane at any time of their choosing. Finally, at Stuart Shave Modern Art, Karla Black has produced delicate artworks of abstract marks on glass, paper and polythene. Light is the companion to these swirling compositions. It plays across their various surfaces and many of the artworks, despite their simple materials, resonate and glow like the insides of giant shells. Responsible in part for this is toothpaste which the artist has requisitioned from her toiletry bag, along with nail varnish, and then added to her artworks. Through these cameo appearances of objects that populate the artist’s own daily routines, she has not only created interesting visual effects, but also instilled herself in the artworks as an additional presence.

AES+F at Saatchi Gallery with photoshopped minarets in traditional settings but the minarets are actually rockets. 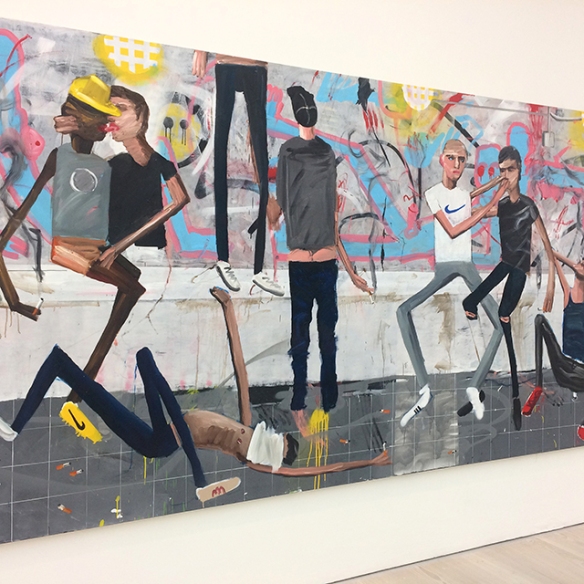 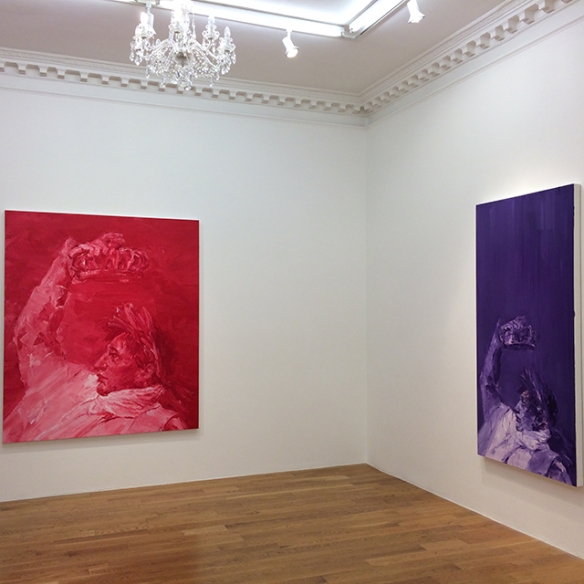 Yan Pei Ming of Massimo De Carlo with reworking of a famous image in which Napoleon was crowned emperor.

R M Fischer at Southard Reid with a sculpture incorporating plumbing parts and some drawing. 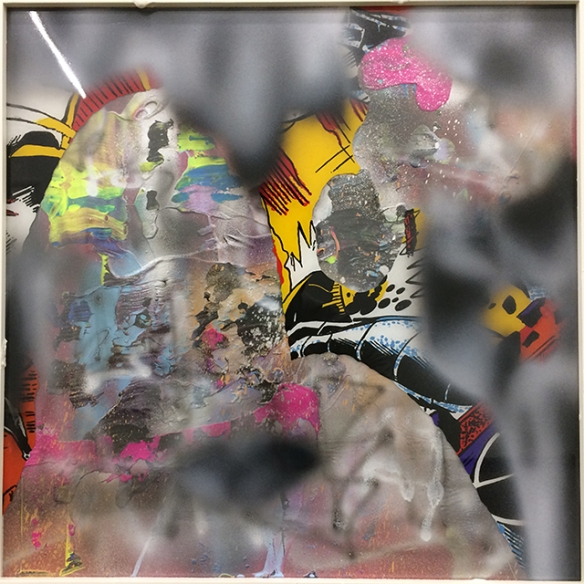 Nick Flatt and Paul Punk showing in a drawing show at Beers London.