The Regent’s Canal highway describes a sort of subjective experience of running on the towpath between Hackney and Regent’s Park. Though not particularly fast in the physical sense the towpath seems quick in a kind of existential sense, namely that with several galleries dotted along its route a sensation of speed is produced by the sheer lack of things that need to be done or thought about during the journey. A few glances at boats, the occasional meandering daydream is all that separates one gallery on the canal from the next. Suddenly the finger is on the buzzer awaiting entry to Victoria Miro Gallery. Jorge Pardo, who is of Cuban American extraction and now living in Mexico, is showing wall-mounted structures that resemble beautifully coloured screens. They are painted, but not in a traditional sense, for the colour emerges from an interaction of minute speckles of paint which have either been created from abrasions into a surface of many layers or, and this seems the case here, have in fact been created completely intentionally by a programmed computer and application device. A thin hair’s-breadth groove around each speckle provides the clue that the speckles themselves have been applied with deliberate intent. On a larger scale, that is on the scale of the entire objects, we see rhythmic patterns running right across their surfaces. Waves and flow lines appear as the eye scans the intricately cut plastic and fibrous sheets. For the lamps this experience is enhanced further by the presence of the interior light source which provides a strong contrast between material and void. In addition this light source promotes a change of geometry in the object. Rather than being planar, as was the case with the wall mounted works, these lamp-like objects are radial. Intricately cut sheets of coloured plexi-glass fan out from the centre, like an elaborate array of coloured cooling fins, conveying their subtle glows to the object’s fragmented surface.

Back on the canal highway, Regent’s Park soon offers a route south to the West End. At Simon Lee Gallery, there is a display of the late works by Hans Hartung. Accompanying this display is a film that shows the artist in a wheel chair, since he is an old man, spraying and flicking paint across large expanses of canvas. Known for his gestural abstraction, the artist is now using a prosthetic device comprising a stick wand and spray nozzle. In the gallery we see the result and how the artist succeeds in his express intention of mimicking the forces of nature. Partly these forces reside within the paint itself causing the drops to cling to one another or else suddenly break free as though they were a shower of ejecting particles, but there is a deeper connection to nature too, manifest most clearly when the work has taken on more complex forms such as a spiral motif in one outstanding example. Here it is as though the artist has attuned himself to the various rhythms that define the universe itself allowing him to represent the more complex forces that create the various spinning and oscillating systems around us.

With Corvi Mora and Greengrassi galleries pairing up this month, several artists are on display in the main viewing space and it requires careful checking of the paperwork to determine which gallery is associated with which artist. Tatsuo Ikeda who as it turns out is with Greengrassi, though in previous years has also exhibited with the blue-chip giant Gagosian, has produced surreal drawings of figures sporting various limbs for locomotion, as well as prosthetic cones. The artwork is very proficient, which allows us not only to enjoy the images, but also to engage with the various distortions of nature without rejecting them on the grounds of incredulity. The images are therefore accepted on account of their near photographic-like appearance. As a passing observation it seems that the two dominant features of these works, namely their Surrealism and their Realism of execution, turn out to be unlikely bedfellows, despite the apparent contradiction of these two terms. 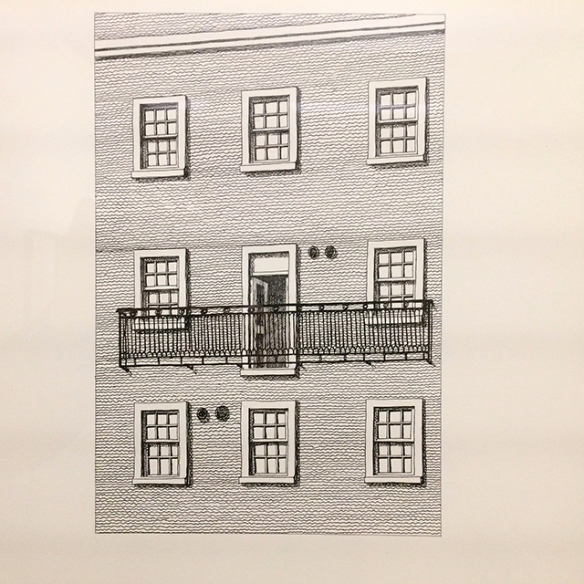 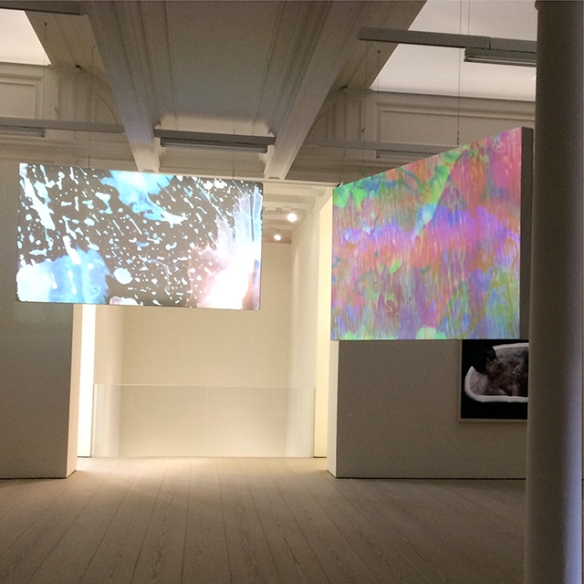 Hans Hartung at Simon Lee Gallery with paintings from late in his career made using spray nozzles and paint-covered olive branches that he could manipulate from his wheelchair.

Estate near Greengrassi and Corv iMora galleries looking resplendent against a blue sky this afternoon. 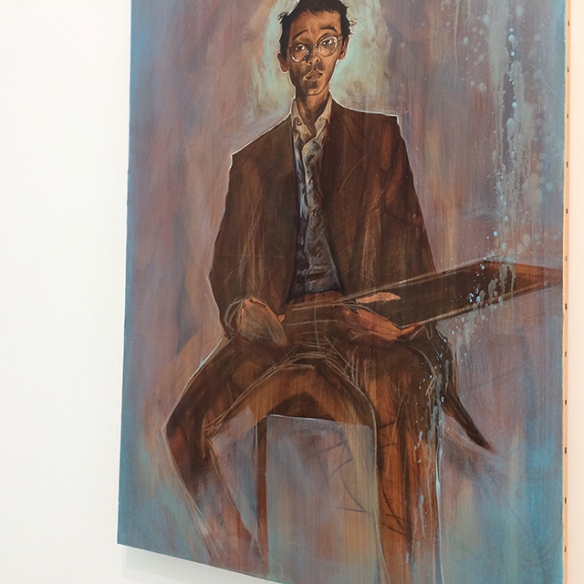