The streets are filled with the drone of helicopters as I reach Lambeth Bridge. Security is high today after the tragic bombing of Manchester two days earlier. At St James’ Park the guardsmen on horseback are given a police escort as a car and policeman on bicycle flank the procession. The first gallery is White Cube where Wayne Thiebaud has a retrospective of pie and cake paintings along with landscapes. The application of paint is in thin single-coloured sheets rendered with parallel brushstrokes. On the food they look like icing whilst on the landscapes, nature itself looks edible. Across Piccadilly I arrive at Pace Gallery. Joel Shapiro has created an installation of coloured solid forms. I read that the airborne forms are made of 3mm plywood making them light enough to be suspended by thin wires. As described on the photo below, the floor based forms actively flaunt much thicker sides and greater mass. As a whole we are perhaps induced through illusion to believe the floating forms are of a similar design and are thereby defying gravity in some way. Back onto the streets I pass Berwick Street market whilst being stuck behind a cement mixer and pause to let the street and the way forward clear. Wardour Street leads on to Berners Street where I push open a door for the second time this month and find myself in an office next to Alison Jacques Gallery, a mistake in other words, and go into the gallery feeling slightly self conscious about the rather gauche circumstance of my arrival. The show I wanted to see is invitation only and in fact completely closed today due to the installation of a big show downstairs, though the woman on the front desk graciously invites me to the big opening in a week’s time. Hopefully this will feature in the next run. Slade School of Art have their BA this week and I was struck by the work of Chloe Ong and Max Martyns, both painters. The next student show I go to is the St Martin’s BA at St Pancras, but first I stop at Brittania Street and see a triple bill of Giacometti, Peter Lindberg and Taryn Simon. I had seen the work by Simon before and loved it. Bouquets recreated and photographed accompany political text describing the signing of a treaty, where the original flowers were present, and the narrative continues to subsequent events many of which involve war and conflict. The walk to St Martin’s College is stunning through the back of St Pancras and over a bridge crossing the Regent’s Canal. The college has an open atrium leading to 3 floors and on the top floor is a piece of work I love by Nathaniel Faulkner where high-tech facade meets low-tech materials. Another work by the same artist catches my eye. An IBM supercomputer, is powered by a few fairy lights, whilst the rest of the lights hang loose, visible from the back along with a roll of Sellotape casually left behind. Finally the canal takes me east to the exit at Wharf Road. After photographing Anne November Cathrin Hoibo’s beautiful textile works at Carl Freedman Gallery, I head south and reach Matt’s Gallery. David Batchelor has created a great installation notable for its use of giant hole cutter and un-precious materials. On the way out I meet the director and after an introduction we do a quick catch up on the day’s shows!

Wayne Thiebaud at White Cube with richly rendered landscapes in addition to his famous cake paintings.

Joel Shapiro at Pace Gallery with coloured plywood forms. From a technical viewpoint the floor based forms show thick chunky edges whilst by a kind of illusion the air based pieces conceal their thin 3mm sides and appear to float from thin wires.

Max Martyns at Slade Degree Show 2017 with an exciting use of brushstroke. 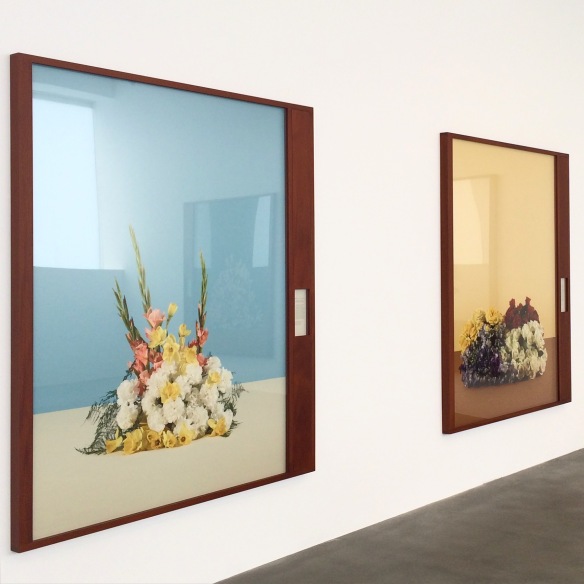 Taryn Simon at Gagosian with recreations of exotic bouquets that had been made originally for important signings of international deals. 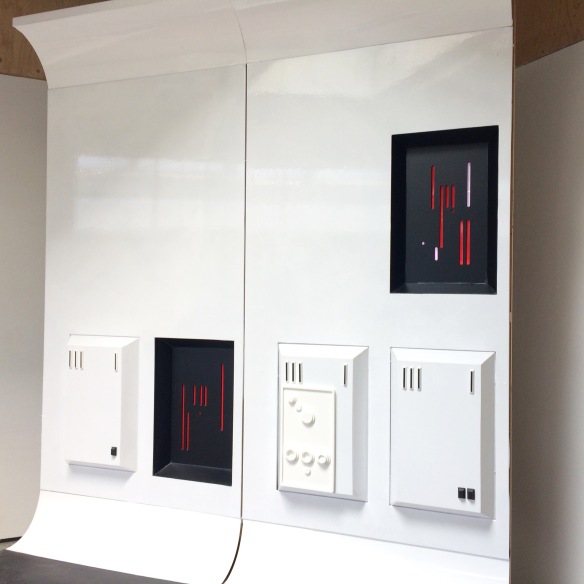 Nathaniel Faulkner at Central St Martins Degree Show 2017 with stunning recreations of technology from the front view. But look round the back and we see the proper artwork with wooden frames and flashing fairy lights that created the illusion of complex processes.

Chicks on the towpath of Regents Canal.

David Batchelor at Matts Gallery with an installation that portrays the city landscape coming alive by night.