Gagosian Gallery, which is on Brittania Street near Kings Cross, has been between exhibitions for several weeks and the two present shows by Nancy Rubins and Vera Lutter are therefore much awaited. They don’t disappoint! The scale of work by both artists is stunning. For Nancy Rubins the scale requires engineering solutions to hold her sculptures together. Assembled metal objects originating from scrap yards and fairgrounds are secured to a network of cross linking metal cables. These cables allow the sculptures to project way beyond the relatively small plinths that they sit upon. Furthermore, the placement of these cables forms an elaborate system of cantilevers which incorporate the various objects on display into their design. The art objects then, rather like Calder’s mobiles, serve both as surface for contemplation as well as physical mass within this larger system.

In contrast Vera Lutter’s works, whilst being physically large, draw their true impact from the scale of the machinery that underpins them. Her works are giant negatives which are about 3.5 metres high, roughly 100 times the height of old fashioned film negatives. It is of no surprise, therefore, that the object she has used for a camera carries a similar multiplication of scale. It’s a shipping container no less. The various expanses of photographic negative before us in the gallery are a sort of physical trace of the walls of this container that they would have been stuck against during their exposure and on this account they bring with them a sense of the magnitude of the container itself, its steel plate and enormous mass. If this double reading were not enough, though, the artist has then presented yet another level of engagement with the images. For they are of the world’s largest radio telescope and this creates a powerful metaphor of observation through use of only the faintest of signals. The faint traces of energy from outer space would be equivalent in some way to the almost imperceptible light reaching the pieces of film inside the container.

The next section of the run is over the hill at Angel. This means leaving the canal behind as it disappears into a very long tunnel and hot-footing it across to the other side. Back by the water, another lock serves to drop its level, before a spur of water branches out sideways past Victoria Miro gallery. A great show by David Altmejd at Stuart Shave Modern Art, a gallery slightly further on, is followed by a return to the canal and a visit to Stuart Shave’s second gallery space in Hackney. Paul Lee has produced several combinations of canvas and tambourines, the latter being a familiar trope for the artist, and they have an interesting sensuous quality due to a sort of exchange of physical properties from their close proximity. The tightly stretched skins of both objects, both sitting about 2 inches away from the wall, unite to produce a sort of extended space across their combined surfaces.

In contrast to these, the artist has produced four wall-mounted objects that appear, at first sight, to be no more than a cluster of recyclables, fabrics and bits of wire. However, they have a great sense of freedom to their forms, something that would require either chance processes for their assembly or else the application of sound artistic principles to block any unwanted rational processes of repetition, use of pre-established pattern or over reliance on an external narrative. None of these deficiencies here and what’s more for good measure, the central core of each object, which may well have been fashioned from a fizzy drink can, offers the one-off surprise to a viewer taking a closer look, that they are actually portraits of a male face rendered in black screen print style ink. Though small, this figurative element offers a strong contrast to their constructivist style.

On the Regent’s Canal. A new layer of image just added with the yellow sign.

Vera Lutter of Gagosian Gallery with images of one of the world’s largest radio telescopes made using a giant pinhole camera constructed from a shipping container. 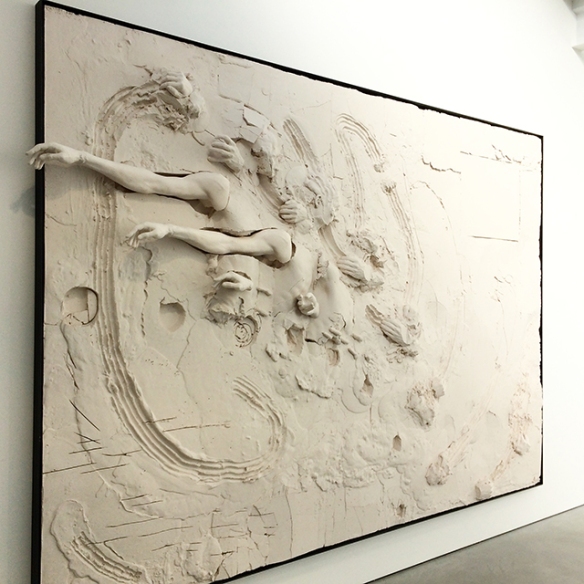 Eddie Peake of White Cube with an immersive installation.

He Xiangyu of White Cube with small clusters of wire and pieces of metal that had benn smuggled out of North Korea to China for a pitifully small cash price.