Today is the RCA degree show in Wandsworth and with a midday opening time, the run will start slightly later and will incorporate a zigzag to the bacon sandwich van parked outside Wandsworth’s recycling depot. The woman frying the bacon is quite chatty and says she has been up working since 6am, whilst in turn I tell her I have come along the Thames from Peckham on a gallery run.

At the degree show, two adjacent rooms stand out as exceptional containing respectively the work of MA sculpture student Rosie Reed and MA painting student Feline Minne. The work by the the sculptor has a sense of abandon to it. A stack of pots and brushes are covered in paint whilst alongside stand three towers containing yet more paint-covered pots. They resemble those organic chimneys found above termite nests to provide ventilation for the colony. Clearly there are formal principles behind the work but there is also a sort of mimesis that one finds sometimes in art whereby the very thing that gives rise to anxiety, namely dirty brushes and pots, is thrust into the artwork itself and becomes its subject. Meanwhile the paintings in the adjacent room maintain this sense of freedom using loosely applied paint which somehow has a chunkiness to it despite its application in thin drippy layers.

Further east along the Thames, having doubled back almost the entire route, is Cabinet gallery set amongst its fantastic location of Vauxhall zoo. Inside, the artworks of Gillian Carnegie are no less alive than the goats that are roaming outside. The paintings somehow retain one vital ingredient that is lost to the poorer pretenders of her craft of still life. This ingredient is time, and not just the time of execution which looks considerable, but rather the time embodied in hundreds of fleeting glimpses captured in the single image. Much of this is down to her treatment of light which marks each glimpse with its own stamp of authenticity.

Further into town, another captivating painter is showing at Sadie Coles HQ in Davies Street. I analyse how Nicola Tyson has skilfully blown up her original sketches to produce vibrant large-scale images which maintain the freshness of the absent original. This is partly achieved by brushwork that applies blocks of colour in single swipes thereby exhibiting a constant element of risk. For me on the other hand, tiredness is starting to kick in now. My legs still hurt slightly from the mammoth run last week. Nevertheless I get myself across Regent’s Street to the little oasis of Golden Square where Marian Goodman Gallery is displaying two major artists, one established from the 60’s and the other relatively new.

Downstairs Giovanni Anselmo, the established practitioner of art povera, has secured marble blocks on to the wall. Unlike the blocks on the floor which have been cut beautifully by a band saw and then worked on further with a drill, these appear to be hewn much more crudely and naturally. Upstairs, the artist Adrian Villar Rojas has created a stunning sculpture. It is basically the legs of the famous statue of David set in a fantastic marble-floored auditorium but containing on its plinth along with the well known tree stump that supports David’s right leg, two playfully rendered kittens that appear to be kissing. Photos secured and art feasted upon, it is time now to head off home. 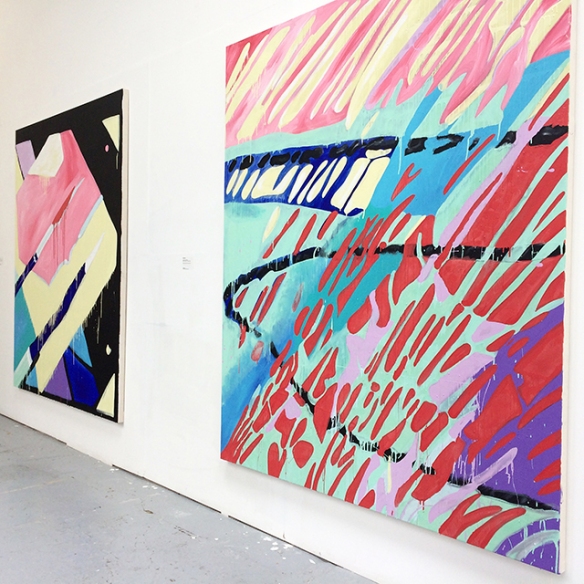 Ryuji Tanaka at Simon Lee Gallery. The paintings have a powerful material quality. 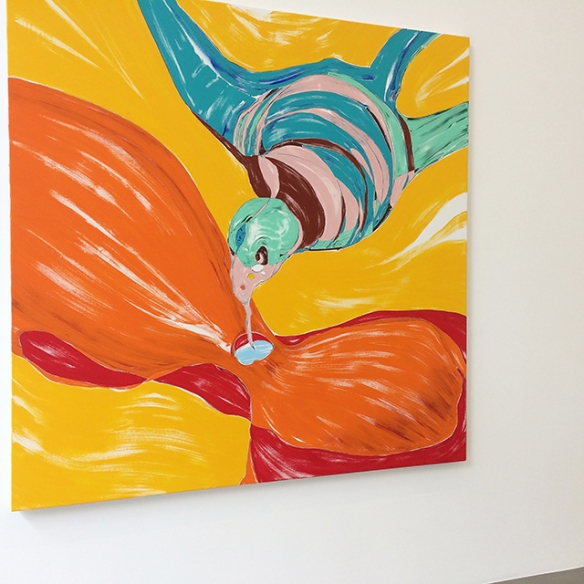 Adrian Villar Rojas of Marian Goodman Gallery with the bottom part of David and some kissing kittens.