Galerie Thaddaeus Ropac, Sprovieri and BlainSouthern are amongst the latest venues to be checked out on this week’s run. The first on this list, Galerie Thaddaeus Ropac, is showing work by Arnulf Rainer, Lee Bul and Medardo Rosso, whose displays are in the various ornate rooms and hallway spaces that fill a classically styled building. Due to the precious nature of Medardo Rosso’s sculptures, a specially sealed room has been created. It has curtains on both its doorways and a heater that raises the temperature to considerably higher than the freezing day outside. Apart from this unexpected warmth, the sculptures themselves offer a real pleasure for the viewer. They actually appear to have emerged from chunks of matter bringing with them a strange life-force to the blocks of inanimate material from which they are cast.

At Sprovieri, the artists Ilya and Emilia Kabakov, who are enjoying a current major retrospective at the Tate, have three paintings on display. Each of these paintings explores the relations between the surface plane of a painting and its picture plane, in other words the physical surface of an image and the illusory perspectival space that lies just beneath it. This dual space of a painting was truly liberated 100 years ago with Russian Suprematism, we are told in the press release. To use an extended metaphor of my own, the angular forms of the new avant-guard movements managed to haul themselves out of the illusionistic world of landscape and still-life, to sit on the paintings’ surfaces, rather as the first amphibians, in fact, had found themselves liberated from water and free to roam land! In this particular show the artists have employed angular forms that are reminiscent of Suprematism but painted in muted pastel hues and beneath these shapes are various rural landscapes. This duality not only adds narrative interest, but also demonstrates as a fate accomplis, the simultaneous existence of the two different painterly spaces the artists were keen to depict.

At Blain Southern, a gallery my friend has recommended to visit, James White is displaying paintings of glasses and associated objects. Catching a glimpse of them through the window last week, they looked like black and white photographs but this week they are revealed as highly realistic monochrome paintings. Every cut in the crystal of various glasses unleashes a new cascade of white paint executed in small brushstrokes. Close up their materiality is clearly discernible but from afar they dissolve into an overall impression of light.

The rest of the run is dictated by the cold weather, since a dead phone (and need for mince pies) necessitates a jog to Hampstead, albeit through some lovely parkland, and then back again in search of Apple HQ and a new battery. The process of queuing for the item actually provides the necessary warmth to bring the phone back to life and to photograph some remaining artworks. At Hauser and Wirth, Jakub Julian Ziolkowski is displaying some vivid paintings, whilst at Raven Row, and with the battery still surviving, Gianfranco Barruchello has produced drawings that resemble mind maps. A container is made with a few pen strokes and encloses several pinkish spheres. From here a cartoonish figure starts to come to life, as though the imagination has bestowed upon these spheres the power to regenerate into a network of vital organs. Perhaps the artist has tapped into yet another type of space then, a third type in addition to the picture surface and illusionistic spaces previously described, a space where the artwork is a trigger of images without needing to provide all the details itself. 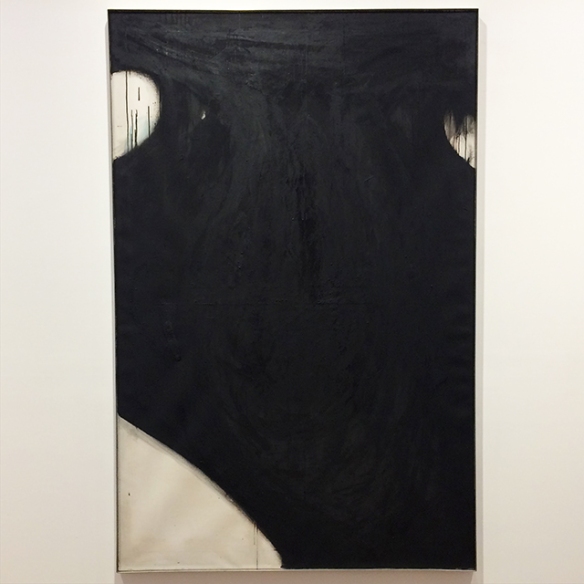 Arnulf Rainer at Galerie Thaddaeus Ropac with abstract works from the 50s and 60s. 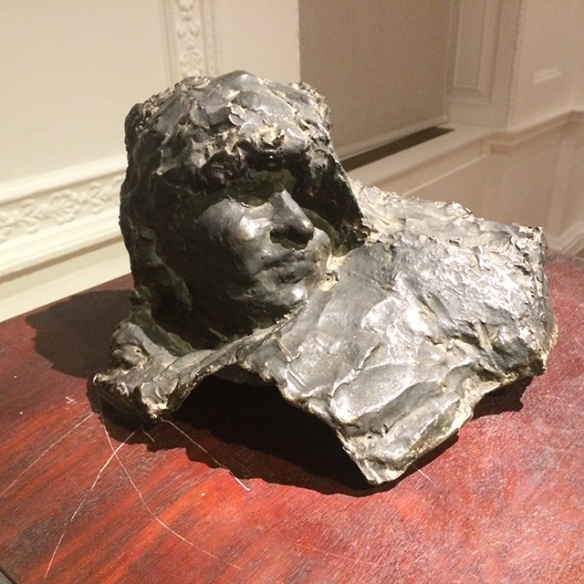 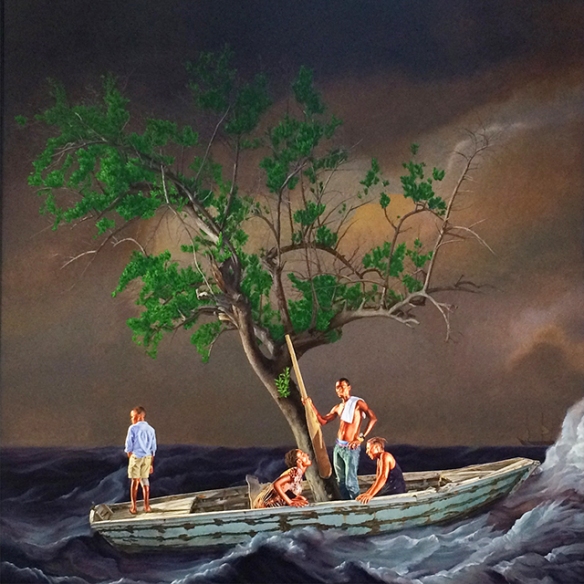 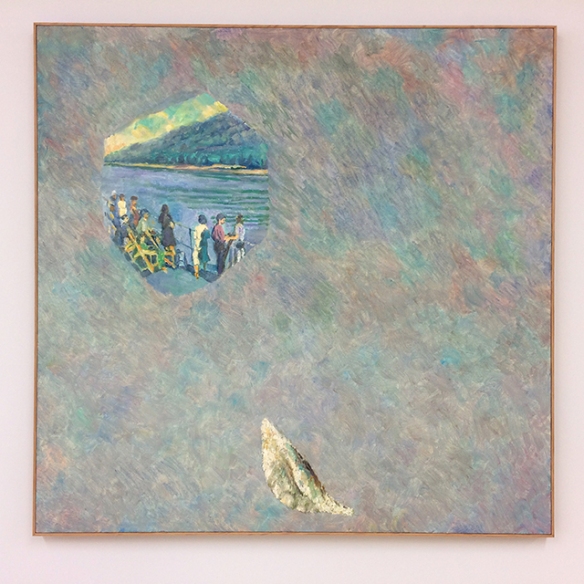 Ilya and Emilia Kabakov at Sprovieri with compositions experimenting with relations between the image and picture planes. 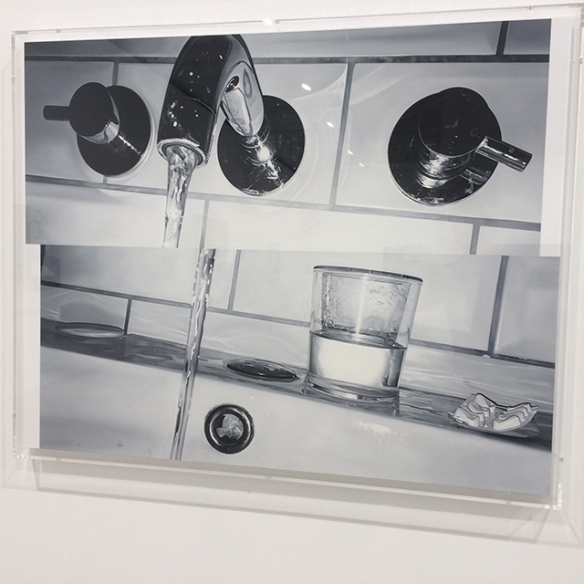 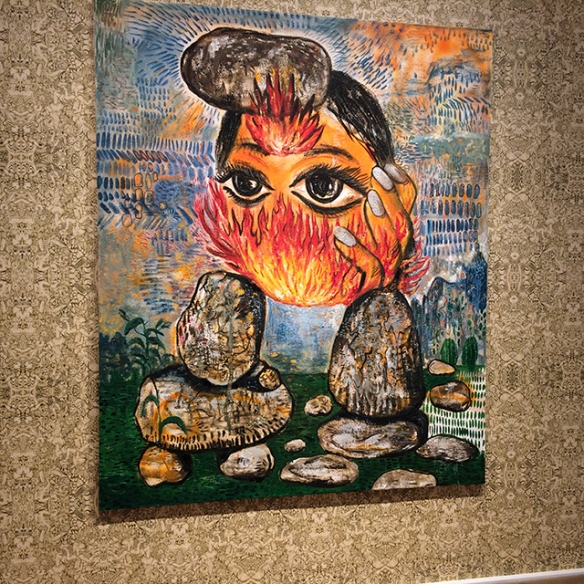 Jakub Julian Ziolkowski of Hauser and Wirth with images by his invented alter-ego, who depicts nature as it is sensed rather than seen. 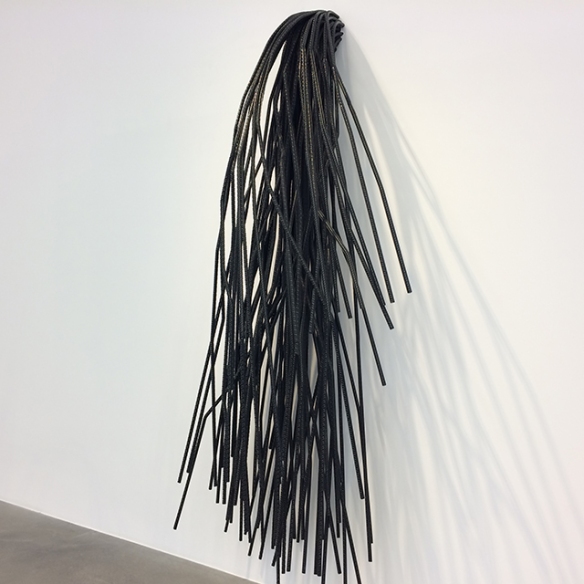 Monika Sosnowska of Hauser and Wirth with sculptures from industrial materials, including steel reinforcement bars here. 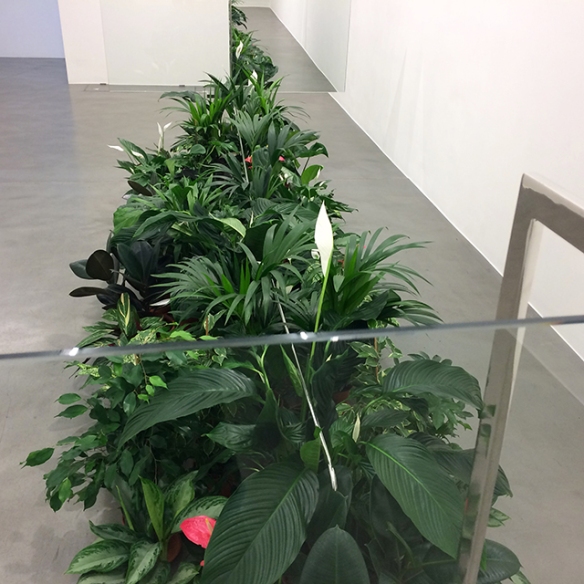 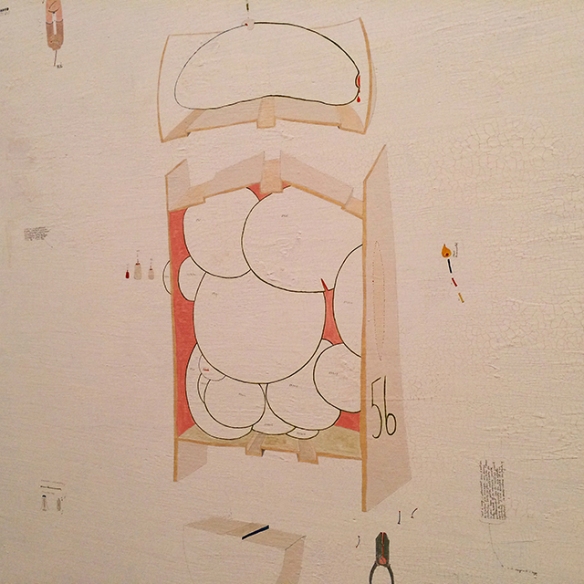