Rose Wiley has a show at the Serpentine Gallery and the jog out west from Peckham proceeds over Lambeth Bridge, along the Embankment to Chelsea before finally reaching the damp Autumn grass of Hyde Park. In the show, a great painting made of several panels, has been installed where two walls meet at right angles. A sort of half panorama is the result. Several figures float around the space, sporting tabs like the kind that were used in children’s cut-out kits for adding outfits and interspersed amongst these figures are various symbols such as ovals and bits of text, each deeply evocative. The overall effect is a painting that feels like a powerful memory since, in addition to the aforementioned symbols, there is also an extensive network of completely untouched canvas. The artist hasn’t tried to fill this space, as would be the case in a normal panorama functioning as a window on the world, but rather has left the raw canvas as a conduit allowing the eye to move smoothly from one symbol to the next.

To the north of Hyde Park lies the little cul-de-sac of canal called the Paddington Basin, and it is via this little stretch of waterway that one then arrives at Lisson Gallery, spared in the meantime from hearing the thunderous A40 traffic, by a sort of emotional bubble that this charming stretch of canal has put in place. Carmen Herera paints jagged forms that jump across the canvas like lightening bolts and it is in the first of Lisson’s two galleries that the viewer encounters them. In addition there is a surprise. The artist has installed a three-dimensional structure, about the size of two back to back wardrobes and with its shiny blue paint, it seems to encourage various dialogues with the other brightly coloured paintings in the show.

In the second gallery are artworks by Roy Colmer from the 1970’s. Think back to the tech prevalent then and we have bulky old TV sets with horizontal band patterns, flickering away due to the limits of their technology. These are exactly what the artist has evoked in his paintings with their uniformly wide bands of colour. The unique quality of these bands is that they change colour during a single pass and this is what makes them hard to pin down as simply a band of coloured paint, a feat achieved, we are told, by the artist having rigged the spray gun to switch colour whilst still applying the paint in a continuous stream.

Lastly, in Brewer Street, Amanda Wilkinson has set up a new gallery after the restructuring of what was previously Wilkinson gallery. She has taken approximately half of the original artist list and of these artists, Jewyo Rhii, is showing a great installation of make-shift printing devices. Reversed lettering and some strange pivoted arms along with black lettering marks on the gallery wall accompanied by various drips and splats, provides the evidence that these machines actually work, up to a fashion. A lump of rock has been placed in a makeshift tray and this seems to function quite literally as a power supply in the manner of the swinging motion of a pendulum in a clock. With this low tech set-up the artist has enabled the viewer to turn away from the immediate function of a printing device and, rather as Roy Colmer had done, in fact, with his depictions of the TV raster pattern, offer instead a profound meditation on the general nature of the reproduced image without the burdensome presence of the duplication devices themselves. 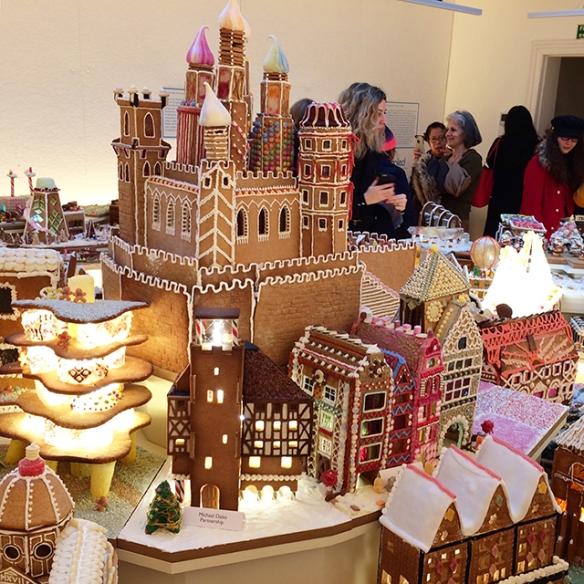 The Gingerbread City in Museum of Architecture with different companies of architects offering various cameos that have fitted together in this carefully designed edible city.

Rose Wylie at Serpentine Gallery with a panoramic artwork that uses a novel method to portray the human figure.

Roy Colmer at Lisson Gallery with subject matter based on old flickering 70’s TV sets, but using a cleverly rigged spray gun that can change colour on a single pass.

Susan Hiller of Lisson Gallery with painted over wallpaper allowing bits of cartoon and word-caption to show through.

Polly Apfelbaum of Frith Street Gallery with a show themed around a foot drawing by Dubuffet.

Jewyo Rhii at Amanda Wilkinson Gallery with an imaginative design for a printing press. The rocks help the hidden upper sections swing against the gallery wall, imparting black ink from the various word moulds in the process.