This has been the week of the big freeze. Whilst it’s been possible to run in the snow, the prospect of having to then shake off the snowflakes upon ringing a gallery buzzer, has been enough for me to delay these visits to this Sunday. First stop is Tate Modern where a stack of materials including red buckets and wooden pallets occupies an almost perfect cube of gallery space. This work is by Tony Cragg and represents the early development of an artist who would go on to create his familiar idiomatic style of layered figures with beautifully smooth machine-worked surfaces.

The Barbican lies due north, over the Millennium footbridge, past St Paul’s Cathedral and across the raised walkway that takes one from the old city walls near the Museum of London to the unassuming doorway on level 2. The banality of the Barbican’s entranceway offers a sort of parallel to the concrete facades outside, confirming the utopian ideal that culture itself should provide the colour and nuances that these physical surfaces lack. This is not an unreasonable or untenable position to take. Frequent visits are nearly always rewarded by the work on show and today is no exception. Yto Barrada, an artist represented internationally by Pace Gallery, has echoed some of the utopian concerns of the hosting site, by depicting another ambitious building project in Agadir, where the greatest architects of the 50’s laid down their smooth lines against the backdrop of a city ruined by civil war. To capture this unique moment in history, the artist has juxtaposed simple wall drawings of the various radical buildings against items of furniture made from more traditional North African weaving techniques.

Maureen Paley is the only commercial gallery I would go on to visit today, since it offers the gracious distinction of being open on a Sunday whilst also exhibiting one of my favourite artists, Kaye Donachie. The paintings are primarily of women and this indeed is one of the show’s themes, to recreate the lost history of which these women were an important part, and in this sense the paintings offer an alternative view of reality. The dissolving forms that loosely depict these figures offer a kind of critique of this failed history, a history that has not managed to grow or take root, by showing instead not a photographic likeness but rather a likeness that seems to have been fashioned from chance events. A nose with distinct outline takes on the additional burden of sporting a giant brush mark, one that has obliterated its curved form, yet somehow this addition works and the facial feature seems strengthened rather than undermined by it.

Finally at Chisenhale Gallery we have dentistry raised to the level of art. This is not because the golden tooth that would be inserted into the artist’s mouth is particularly beautiful nor is it anything to do with recent developments of artworks taking on the narratives of prosthetics or plastic surgery. No, this dental procedure comes as a rather beautiful gesture by the artist, Lydia Ourahmane, who had the tooth inserted as a delicate and empathetic response to her own grandfather. He had in fact extracted all his own teeth in a decisive gesture against the then ruling French government. As a native to north Africa, he was at odds with their presence in his country. Then faced with the impossible position of being required to fight for them, he decided to render himself unfit for service by taking the drastic action described. This story is revealed in the gallery through the body of the artist, his grand daughter. An X ray depicts her own mouth before having the tooth inserted, whilst next to it mounted on the wall is a little nugget of gold, a second identical gold tooth in fact, since the artist had actually had two made, which offer a sort of tableaux vivant of these various events of fifty years ago.

During the big freeze, on the day of the hoped-for gallery run. It was too cold. 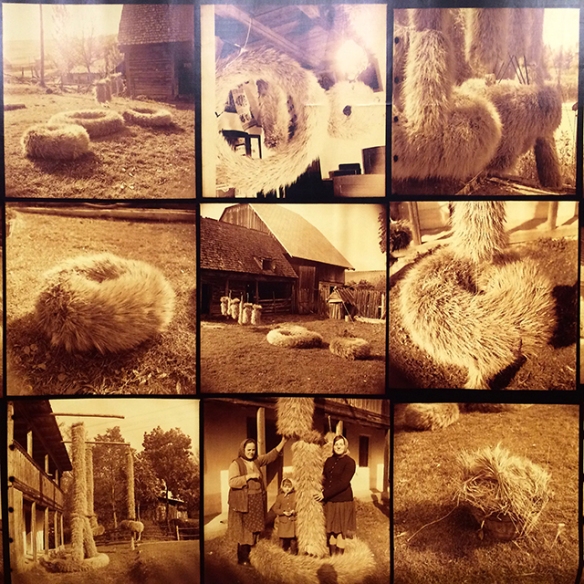 Wheat objects woven together by Ana Lupas. This was based on a traditional Romanian practice.

Yto Barrada of Pace Gallery showing at the Barbican Curve with drawings of the modernist buildings in Agadir set against traditional woven chairs and lampshades. 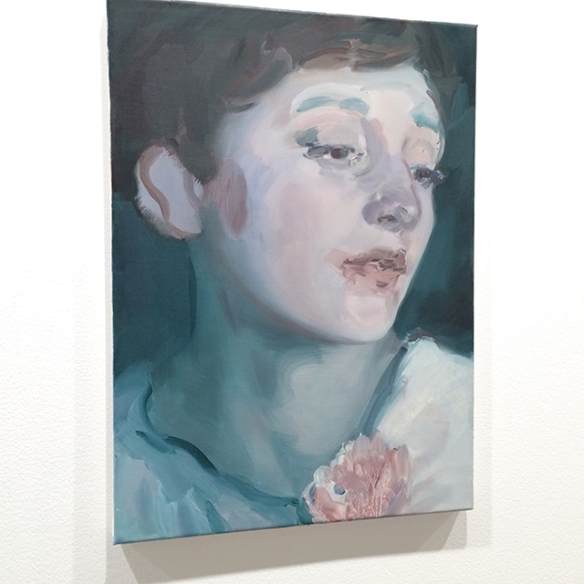 Lydia Ourahmane at Chisenhale Gallery has produced a historical artwork. The gold tooth is a copy of the one the artist had inserted in remembrance of her grandfather who had extracted his own as part of his resistance to French rule.

Regent’s Canal after the big freeze. 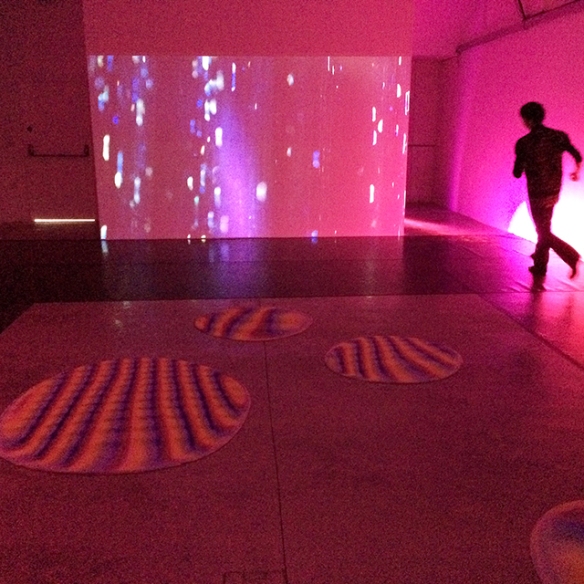 Flavie Audi and Samantha Lee with large projections of iPad screens and an accompanying dancer at Specisl Projects on Decima Street.