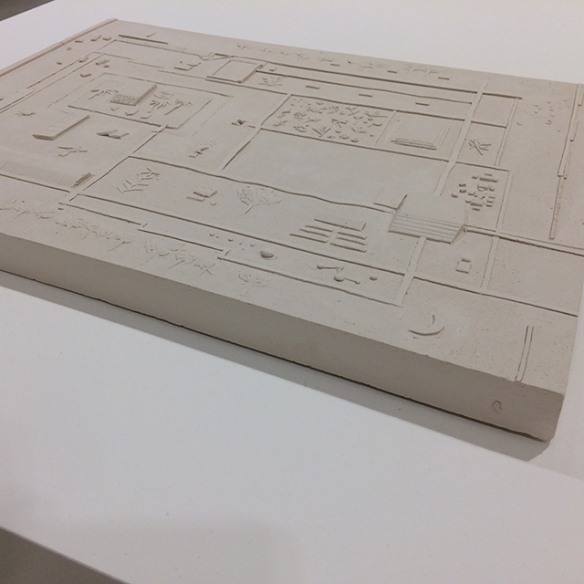 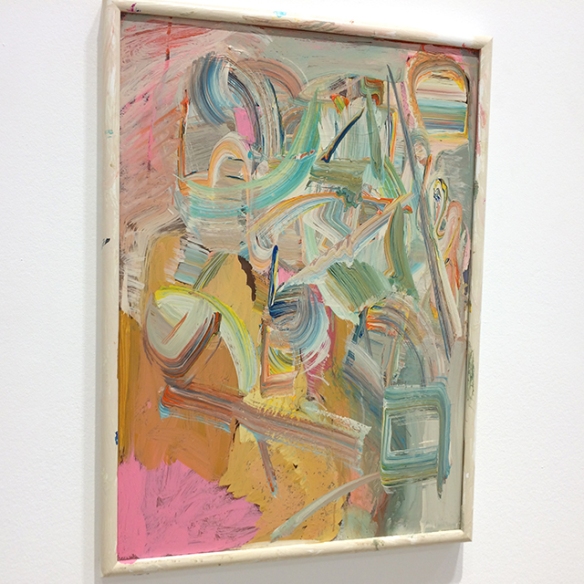 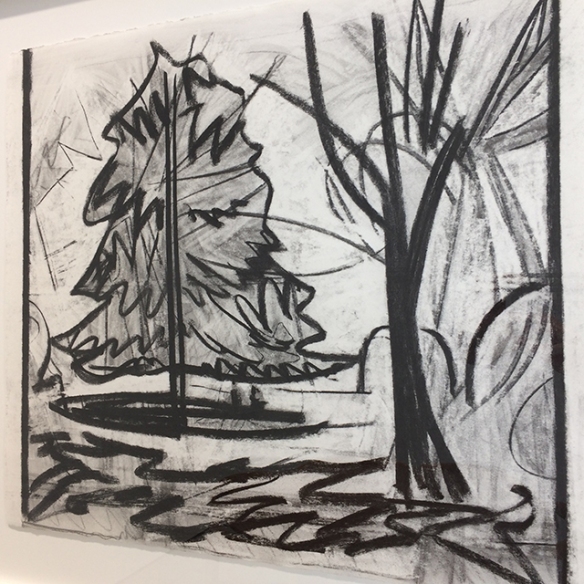 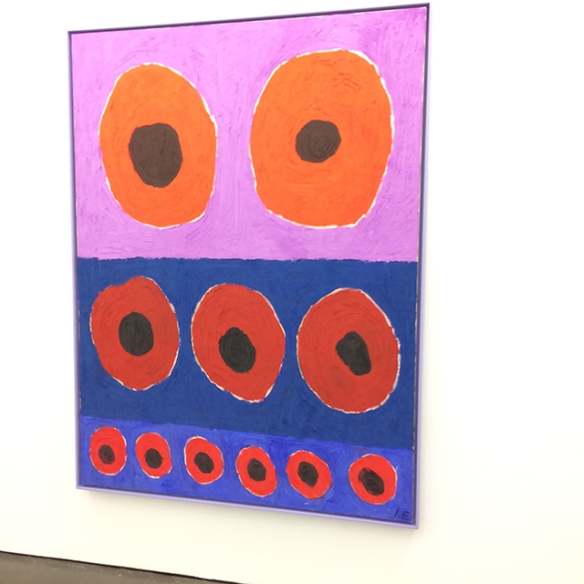 Ida Ekblad of Herald Street with bright images made, I believe, from bright melted plastics. 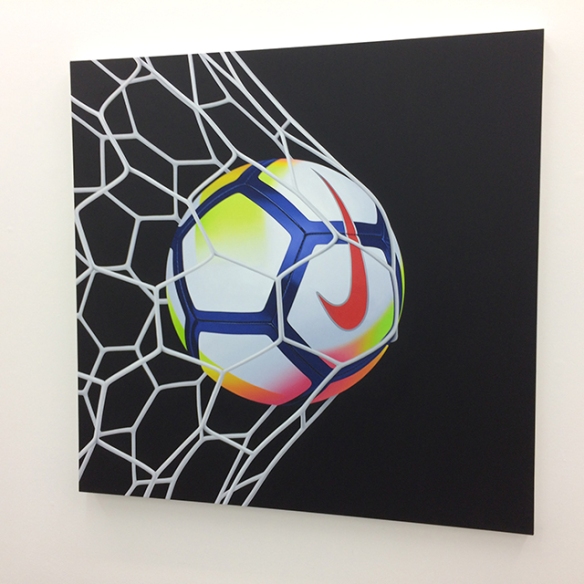 Mathew Cerletty at Herald Street with a great painting of a sports image. 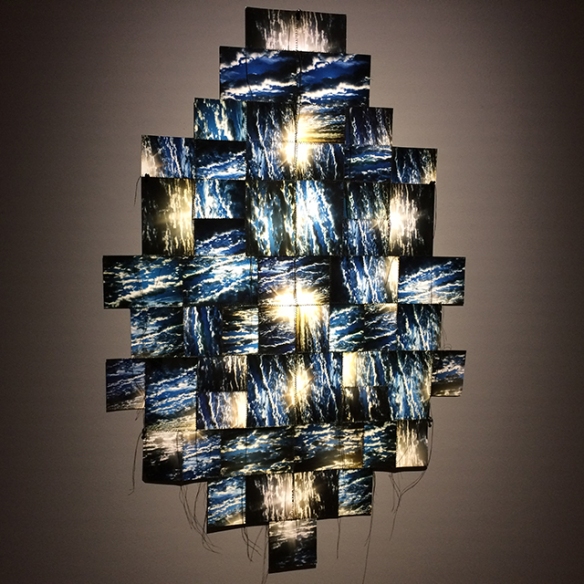 Hunter Reynolds at Hales Gallery with stitched pictures of clouds. As the artist lost many friends through AIDS these stitched photos have taken many forms ranging from (impractical) hospital blankets to happy memories. 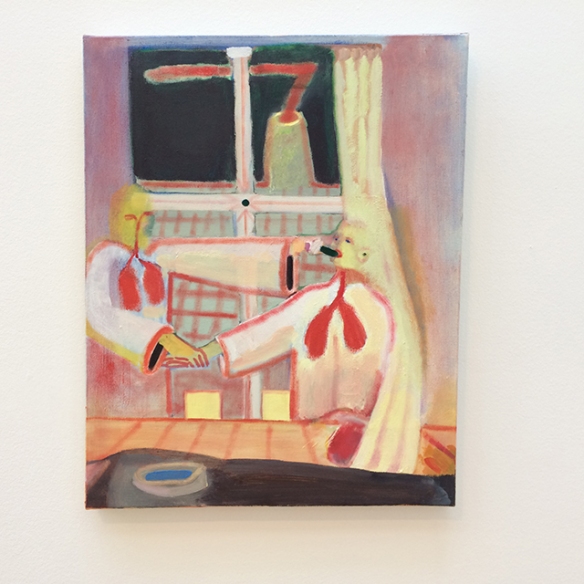 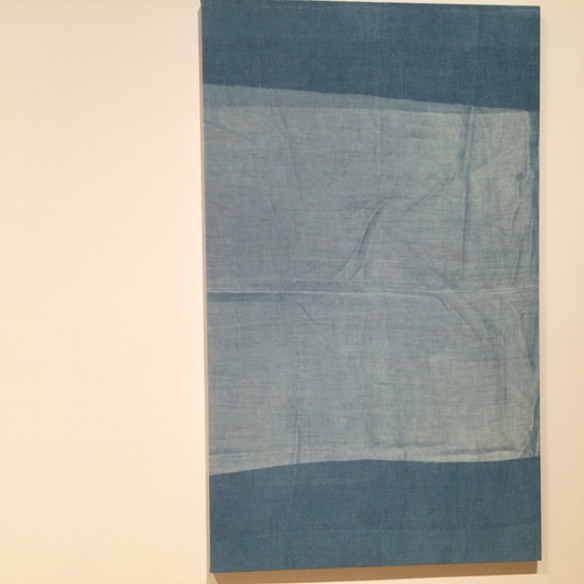 Ayan Farah who I believe has previously shown with Almine Rech, now showing at Whitechapel Gallery in London Open 2018. 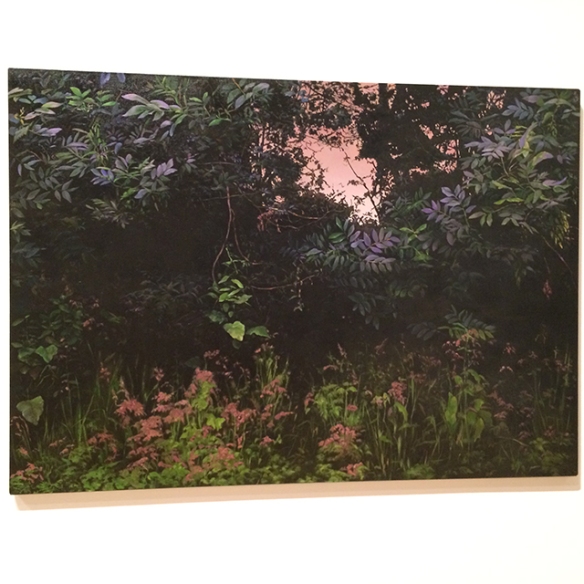 The run to Trinity Buoy Wharf has been an attractive activity ever since a speaker at an event there, Ian Sinclair, notable for walking round the entirety of the M25 and writing a book about it, declared that this wharf, with its location next to the River Lee, marked an historic site. From here the Saxons would check out the Vikings, whilst the latter would return their reconnaissance in this direction from across the barrier of the River Lee. It is right on this junction that this smaller tributary departs the Thames as it takes its waters from the North. With a bacon roll consumed, it is time to head to the first gallery of the day via a series of waterways.

The River Lee provides quite a formidable barrier to the foot traveller even today and unlike the fairly tortuous route of a few weeks ago which required a four lane highway as travelling companion to cross the river, today’s route wends its way north past the giant docks of Canary Wharf and onwards up the Regent’s Canal, escorting me to Hackney, and indeed, arriving fifteen minutes early at one of the midday openers. PeerUK is hosting Catherine Story from nearby Carl Freedman gallery and in its window are clues to the nature of the show. Clay maquettes are the artist’s starting point and these have then been transposed to canvas as a series of Surreal looking paintings populated by chunky figures with shear planes suggestive of both limbs and machinery. They are in fact reminiscent of Cubism and with the clay being a plastic medium, the artist appears to have worked out in advance, the various folds, bobbles, distortions and protrusions, distinctive of that style, before then transposing them to the two dimensional world of paint.

Herald Street Gallery has opened a new space in Museum Street just near the British Museum and Ida Ekblad is on show. Her rather stunning, bright paintings are actually made with plastic, a fact gleaned whilst reading her press release off the phone in those last few minutes of waiting outside the previous space. The plastic has been melted and smeared with a palette knife and yet none of its intensity of colour, whether it be derived from a previous state as coloured carrier bag or plastic household object, a specific origin that the artist doesn’t actually divulge, has been lost. Rather this detritus of daily life lives on in a strange afterlife as material of a painting, depicting the simple forms of pots that are themselves reminiscent of Greek urns, along with a whole host of other types of ornamentation ranging from flowers to simple coloured planes.

After seeing yet more good quality work up for auction at Phillips, with a couple of stand out pieces by Alex Israel and Barnaby Furnas, the next destination is south of the River at Vauxhall where Cabinet Gallery sits proudly in the middle of the aptly named, Pleasure Garden. Henrik Olesen’s musings on the nature of an object lead to an unusual, though confident display of tacked, nailed and propped materials that sit and hang against the various white-walled nooks that this gallery has made available with its slightly unusual polygon-styled floor plan. On many of the box-sections of brushed aluminium, which feature as rectangular frames or stand-alone girders, there are small inscriptions presented on clear plastic rather as one might find accompanying cooking instructions on a ready-meal, and these provide further philosophical reflections by the artist on object hood. Perhaps by giving us a general scene of peculiar part-objects to look at whilst openly questioning their validity, the artist is also trying to evoke an aspect of the human condition that has been put into words by the philosopher Heidegger, that since the Greek ages we have passed over the phenomena of the world, a general being, and instead focused our attention, to our detriment, on individual objects from which we try to extract meaning. 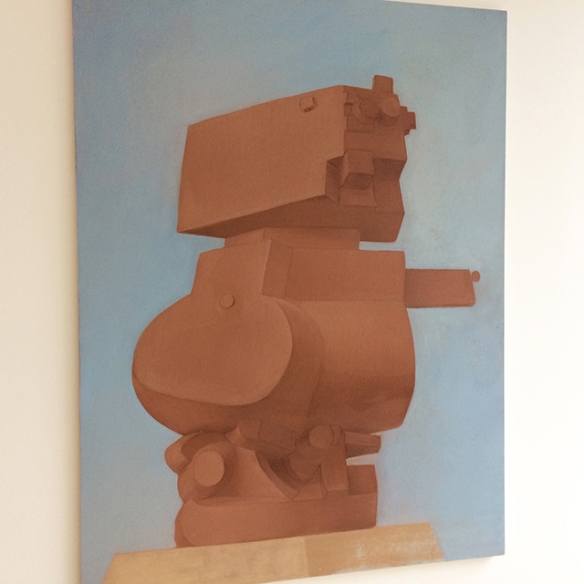 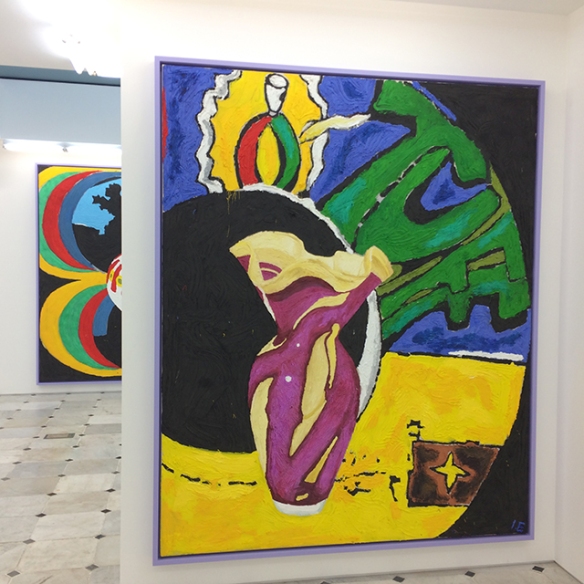 Ida Ekblad of Herald Street Gallery with vivid paintings made from melted plastic. 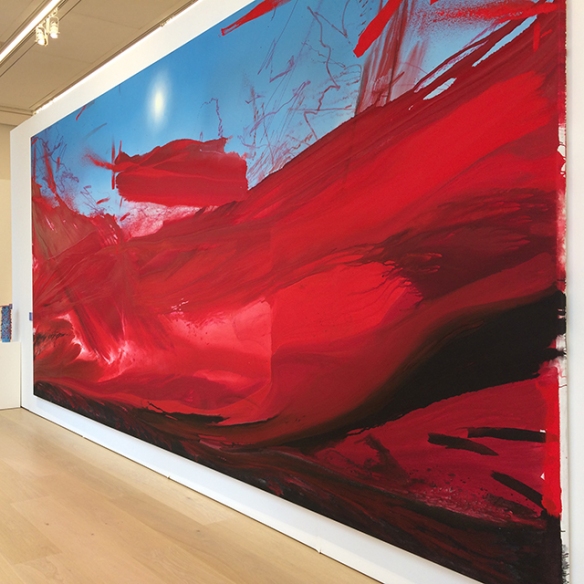 Barnaby Furnas of Victoria Miro provides the statement piece for auction at Phillips. 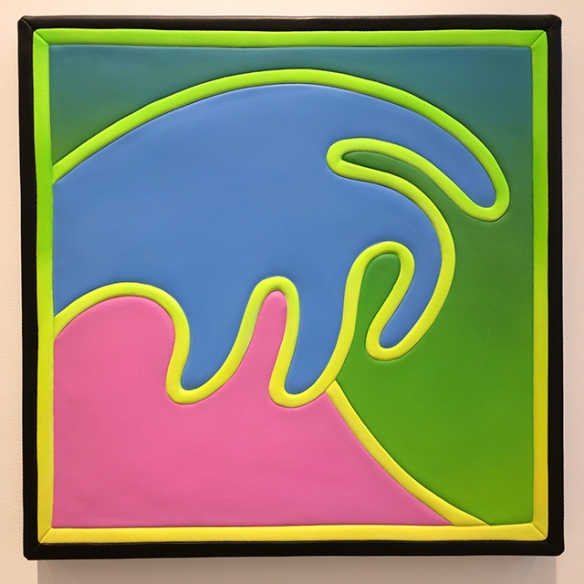 Alex Israel on auction at Phillips and adorning the front cover of the catalogue as befits a top ranking artist shown by Gagosian Gallery amongst others. 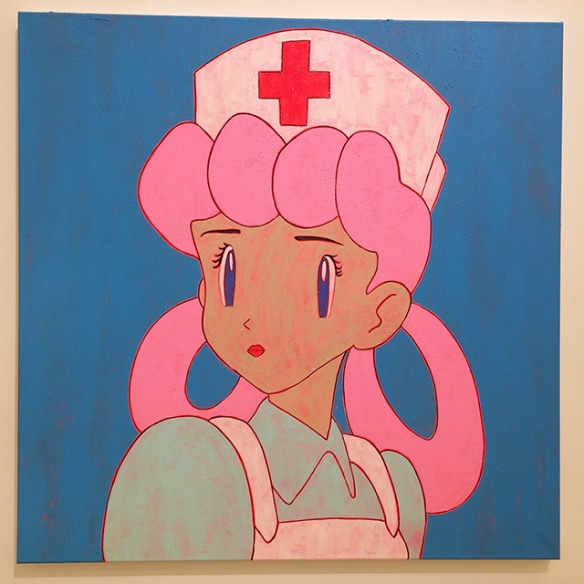 Michael Pybus on auction at Phillips. 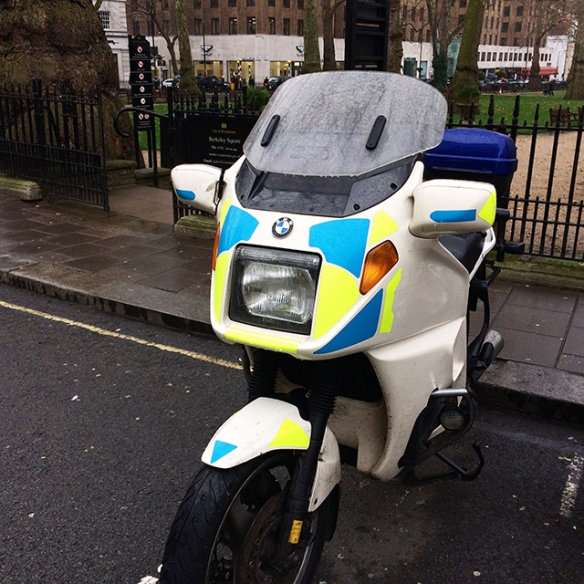 Clever use of stickers on this bike. 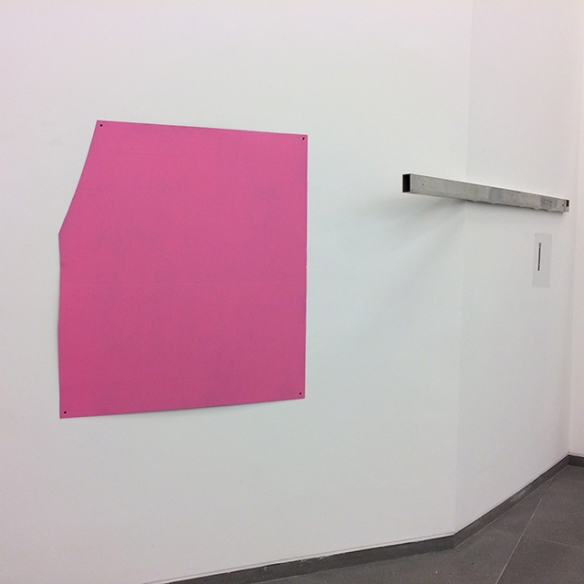 Henrik Olesen presents a show at Cabinet Gallery of what could perhaps be described as partial objects, many of which are casually stapled or pinned to the wall. The show itself seems to question what an object actually is. 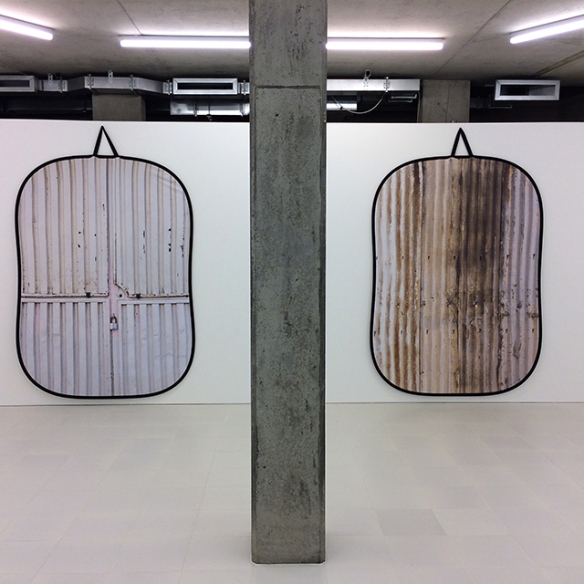 Simon Thompson of Cabinet Gallery, an artist I’ve wanted to visit for a while, has done prints of objects on rather fab rug-like objects with a hanging tag. 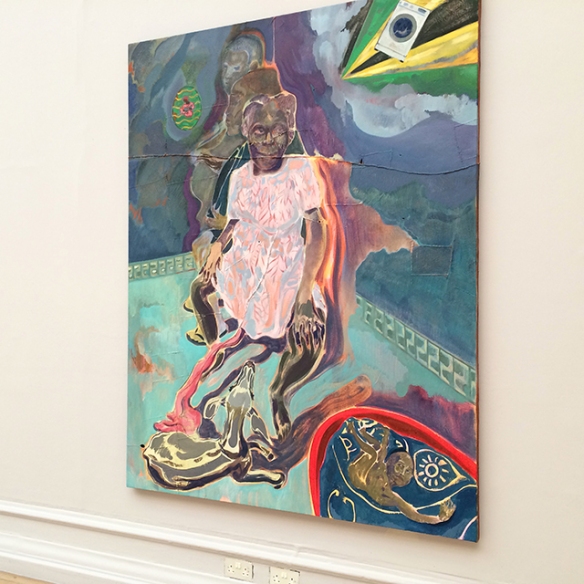 Michael Armitage of White Cube showing at South London Gallery. An allegorical piece as a mother gives birth to a goat. Not a good thing! and dreams of a better life symbolised by washing machine top right, are back on hold.